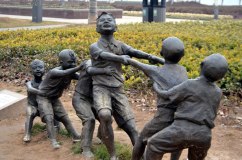 Cincinnati ranks third as one of the nation’s worst areas for child poverty in the nation. Hamilton County’s inner city children grow up in a poverty pandemic and a prison pipeline.

Ex-Hamilton County Public Defender Suzannah Meyer worked for the office for three years until she was fired for putting gum in the pipe.

Meyer says she was fired in 2010 for simple procedural tasks: amicus crime briefs, motions for discovery, objections, and the subpoena of records from Hamilton County Jobs and Family services.

“I was called into Ray Faller’s office and he told me, ‘The department doesn’t need you any more,’”

Meyer says that the Hamilton County Prosecutor, Magistrates, and Public Defenders asked her to stop filing motions even before she tried to get a police dash camera video of a child who was beaten by cops.

On behalf of Meyer’s clients, she says to defend them to the best of her ability and have a right to a fair trial she needed use those motions in court. However, when she would ask for any motion the prosecutor and judges would prevent her from taking any actions.

“My caseload then dropped to Zero,”said Meyer. “How can defend my client when I can’t file any motion?”

What Meyer received instead was suspicion, silence and a restraining order from a judge not appear in her courtroom. She was called in later that year and fired.

Is there a system to railroad children in Hamilton County Juvenile Justice System for the school to prison pipeline? Hamilton County has the highest adjudication rate of cities in Ohio.

Hunter has been a topic of controversy as a social justice figure who won a recount election defeating Republican John Williams in 2010; an election Williams lost spending $2.2 million fighting to win.

“How dare the county commissioners and John Williams, after literally trying to steal my judgeship for two years and spend almost $2 million of the county’s money, now accuse me of waste?” said Hunter

Ever since, Judge Hunter has faced disrobed shenanigans at play, numerous lawsuits and consistent disapproval over hiring her qualified job applicants.

“I believe that since I’ve been here, the goal has been to stymie my efforts to carry out my judicial responsibilities,” Hunter said.

“If this was done to intentionally thwart our ability to pursue an appeal, a crime may have been committed,” Prosecutor Joe Deters said.

Last week, under stress Judge Hunter collapsed and fell ill as she was carried away by an ambulance. If this is how they treat their own people, what will they do to your loved ones?

It is little wonder then how this treatment to people working in the best interest of children cannot stop the vicious cycles of poverty.

Financially insecure families are left vulnerable to being preyed upon by the staff of the juvenile justice system of Hamilton County Ohio. And Hamilton County Public Defender Ray Faller has no room to throw around words like ‘slander.’

“My attorneys were slandered and I’m not going to stand for it and I want to set the record straight,” said public defender Ray Faller.

If anything about the record of Suzannah Meyer says is correct, then she has been slandered by the Office of the Public Defender of Hamtilton County.

She should take the county to court on behalf of the equal opportunity employment clause and notify the U.S. Justice Department about the criminal violations of this office.

About Take The Gate